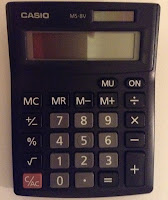 I have a new job!

I'll be the accountant for a library. I think that's about as close as my day job and my writing can get, at least until writing becomes my day job anyway. A girl can dream, can't she?

However it's been a while since I changed jobs; 7 years in fact, and the thought of moving on is utterly terrifying. So terrifying that I almost talked myself out of going for the interview. Then again, it could have been the requirement to make a ten minute presentation (with visual aids) as part of the interview that was increasing my nervousness.

The presentation went well in the end, (even if my PowerPoint slides did get out of sync with my speech as a result of my inability to remember to press the button at the appropriate time). Which is fortunate given the topic I was tasked with presenting is not only a real project, but will be one of my first pieces of work when I start my new job.

Negotiations have now commenced for my start date in my new role. As it's all part of the same organisation, it's effectively one giant game of tug of war between my current boss and my new one. But whilst it's incredibly flattering and a real boost to my self-esteem to be fought over, I'm not sure that this game will go in my favour.

With my current boss unwilling to let me go until they find a replacement, and my new boss eager to get me to start as soon as possible as their last accountant has already left, at present it looks like I will be doing two jobs until the 1st of March.

This isn't quite what I had in mind when I told the interview panel I was looking for a new challenge.

Still, as my mother always says; 'it'll all work out in the wash'. There are after all far worse problems to have. Though if someone could work out how to add a few extra days in the week...

According to my friends however, my career move is really just a sneaky way of getting my novels onto the library shelves. Perhaps I should get that added into my contract...