I'm thrilled to join in with the blog tour for Mary Rosie's War by Catherine Byrne.

Both my grandfathers served in World War II. I never knew my Dad's father, sadly he passed way before I was born. But a glimpse into his life during the years he spent fighting for his country can be found in faded black and white photographs. We'll never know the stories behind the photographs, or what became of the men are that are pictured beside him. According to my Dad his father didn't talk much about those dark days. He had lived through the nightmare and didn't want relive it. But occasionally he'd tell of the friendships, the adventure, and the wonder that took him far from his home to places he barely even heard of.

Mary Rosie's War is a beautifully told tale of the conflicting emotions that war brought to the young men and women who served their country, and the heartbreaking reality that nothing and no one would ever be the same again.

Told from the perspectives of Mary and her friends and family, the novel cleverly shows the different views and expectations that were held at the time. For Mary it's seems like a chance to broaden her horizons, but to her mother it seems like the past is repeating itself. Their journey brought tears to my eyes at times. It takes a strong writer to create characters so real that you feel their heartache, love and loss in such a way.

An exceptional tale, passionately told, which gave me more understanding of the struggles my grandparents endured, not just in the heat of battle but in the tough decisions that they had to make in a time of such uncertainty. 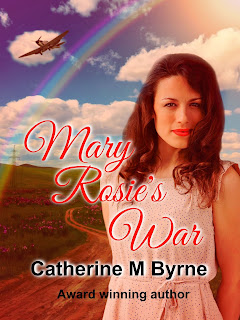 WW2 has been declared. A strange find on the beach gives Mary Rosie the chance to fulfil her dreams and contribute to her country, but all is not what she imagined.

After witnessing the first bomb to be dropped on mainland Britain, Mary watches her friends leave to join the forces and longs to be with them, but is held back by loyalty to her widowed mother.

France has capitulated. Johnny Allan’s regiment has been annihilated by German troops north of Paris. Johnny has to find a way to get home and to the girl who no longer waits for him.

Leisel is a German Jew who lost her family to the Nazis and has to make her way in Britain, a strange new country, while harbouring a desire for revenge.

Their lives become entangled in a way that no one could have envisaged.

A story about war, family ties, love, loyalty and loss. 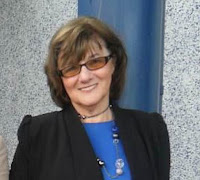 Catherine Byrne always wanted to be a writer. She began at the age of eight by drawing comic strips with added dialogue and later, as a teenager, graduated to poetry. Her professional life however, took a very different path. She first studied glass engraving with Caithness Glass where she worked for fourteen years. During that time she also worked as a foster parent. After the birth of her youngest child she changed direction, studying and becoming a chiropodist with her own private practice. At the same time she did all the administration work for her husband's two businesses, and this continued until the death of her husband in 2005. However she still maintained her love of writing, and has had several short stories published in women's magazines. Her main ambition was to write novels and she has now retired in order to write full time.

Born and brought up until the age of nine on the Island of Stroma, she heard many stories from her grandparents about the island life of a different generation. Her family moved to the mainland at a time when the island was being depopulated, although it took another ten years before the last family left.

An interest in geology, history and her strong ties to island life have influenced her choice of genre for her novels.

Since first attending the AGM of the Scottish Association of Writers in 1999, Catherine has won several prizes, commendations and has been short-listed both for short stories and chapters of her novels. In 2009, she won second prize in the general novel category for ‘Follow The Dove’

In 2016 The Road to Nowhere won second prize in the Barbara Hammond competition for Best Self Published novel. The follow up, Isa’s Daughter won 1st prize in the same competition the following year.

Although the books follow the fortunes of the same family, they are all stand-alone.

The fifth book in the Raumsey series is Mary Rosie’s War. 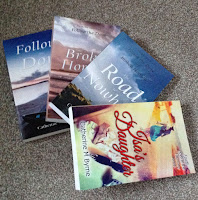 1st Prize – all 4 of Catherine Byrne’s previous books in paperback .

*Terms and Conditions –UK entries only. Please enter using the Rafflecopter box below. The winner will be selected at random via Rafflecopter from all valid entries and will be notified by Twitter and/or email. If no response is received within 7 days then I reserve the right to select an alternative winner. Open to all entrants aged 18 or over. Any personal data given as part of the competition entry is used for this purpose only and will not be shared with third parties, with the exception of the winners’ information. This will passed to the giveaway organiser and used only for fulfilment of the prize, after which time I will delete the data. I am not responsible for despatch or delivery of the prize. 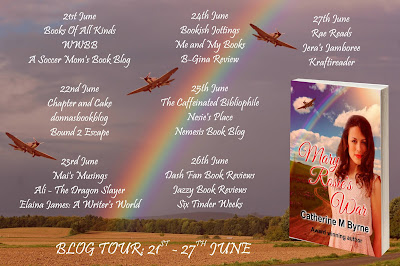