Last year I moved to the coast to focus on my writing. What I didn’t expect was that the move would also lead my writing in a new direction...


At Christmas I met filmmaker Vahid Keshavarz. His passion and enthusiasm for his craft helped to reinvigorate my own creativity, which despite my best intentions had been floundering as my move had proved to be somewhat more distracting than motivating.


Vahid and his crew are currently planning their next project, which is a short film entitled 'A Heart Between Us'. I’m incredibly excited because it’s a script that Vahid and I have co-written. 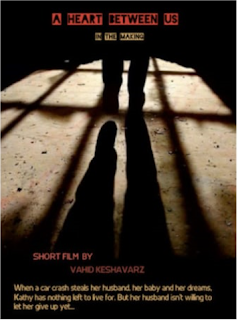 'A Heart Between Us' is a short film about human connection and the impact someone can have on our lives even when they are no longer with us. It's a young woman's struggle with loss and grief and her realization that life is a gift.


In order to get filming underway, we do however need some financial support and are aiming to achieve this with crowd funding. Please take a look at the link below. Whether you are able to help contribute or just help us spread the word about our film, we are so grateful for your support.

Get perks, make a contribution, or simply follow updates. If enough of us get behind it, we can make 'A Heart Between Us' - Short Film happen!

You can find out more about Vahid and his films on IMDb.com