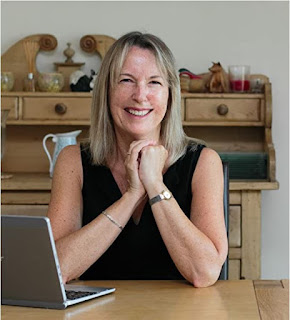 Today it's my pleasure to welcome Wendy Clarke, to share her Chasing Dreams story

It might surprise you to know that I never used to have a writing dream to chase… yes really! I was not one of the lucky people born with a pen in their hand, and despite loving creative writing at school, a career as an author had never been on my radar.

You see, I didn’t become a writer until my fifties and before that I was a teacher, a wife, a mother. Writing was something I taught, not something I did. A book was to be read not written. Yet, something happened to change this… to allow the writing bug to call to me and let me chase it wherever it chose to lead me. This is my story.

It was ten years ago when my life changed and I remember it as though it was yesterday. I had just been told that the small primary school, where I taught English, was closing and all the staff were to be made redundant. I felt numb but it didn’t really sink in until the following week when, instead of going into class to teach, I remained at home contemplating an uncertain future.

s luck would have it, my brother had just completed an online creative writing course which he thought I might enjoy. With nothing better to do, I took his advice and enrolled. I hadn’t expected to enjoy it so much, and when it ended, I felt bereft. That was when I knew I’d caught the writing bug.

It was my course tutor who suggested I try writing stories for one of the women’s magazines. Missing the challenge of writing, I decided to give it a go. Enter dream number one… to have a story published. At first, I had the expected rejections, but I didn’t let it put me off. I carried on writing and submitting and my patience paid off when, three months later, I had a letter from the People’s Friend saying they liked one of my stories. Hurray! Dream number two was to sell stories to other magazines and I was delighted when I had sales to Take a Break Fiction Feast and Woman’s Weekly.

It was becoming clear that what had started as a hobby was turning into a new career and my dreams started to get bigger. What if I wrote a serial? What if I managed a hundred story sales? I chased each dream with purpose, not happy until I had achieved my goal, and over the next few years was delighted to see two of my serials appear in The People’s Friend and celebrated not one but three hundred story sales.

All this was a dream come true but I had more dreams to chase. The short story market was shrinking and I fancied a change of direction. My thoughts turned to writing a novel. My first attempt was a romantic mystery which bagged me an agent, but what they really wanted me to write was a suspense. Did I think I could do it? My degree was in psychology and I’d always had an interest in how the human mind can affect behaviour, so I decided it might be interesting to explore a darker side to my writing. A year later, I’d written What She Saw, a psychological thriller set in the Lake District.

The next dream, unsurprisingly, was to have my novel published… maybe the biggest dream of all. It didn’t work out with the agent, but I was surprised and delighted when my novel went on to win first prize in the Flash500 Novel Competition and was picked up by digital publisher Bookouture. What She Saw was published the following year to be followed by three more psychological thrillers. My fifth, Blind Date, will be coming out in October and is available to pre-order now.

I won’t pretend that becoming an author has always been easy, in fact it’s been a roller-coaster of a ride, but it’s definitely been worth it.

Many people have dreams but are too scared to chase them. Don’t be one of them… I wasn’t.

Wendy Clarke is an Amazon bestselling writer of psychological thrillers published by Bookouture. Her debut thriller, What She Saw, won the Flash500 Novel Competition. She started her career writing short fiction and serials for national women’s magazines and with over three hundred stories published, is a frequent judge of short story competitions. Her fifth psychological thriller Blind Date will be published in October.

Wendy lives with her husband and step-dog in Sussex and when not writing is usually dancing, singing or watching any programme that involves food!