So just before Christmas we decided to put a hold on our ongoing kitchen development so that we could enjoy the festive break without emptying cupboards or rearranging furniture, something which seemed to have become part of our weekly routine recently.

The granite worktop was cracked, the blind was up though somewhat slanted and the old laminate flooring that had seen better days was still waiting to be replaced.  But that was okay, it was only till after Christmas.  Good theory huh?

Well we made it through Christmas with no issues, aside from trying to learn how to time the cooking so everything was ready to be served at the same time using the new electric hob and oven.  The oven cooks quicker than the old gas one and I haven't quite mastered the art of controlling the hob properly, my old gas hob was so much more responsive, it also made less mess when things boiled over...

But now January is upon us and we figured the kitchen would finally be completed.  We really should have known better by now shouldn't we?

The guys delivered a sample piece of granite to double check the colour matched before they start cutting it to size.  Guess what?  It didn't match.  So we're waiting for another piece to be shipped from Italy so we can try again.

We're trying to take a more chilled out approach to the farce that has become our kitchen improvements and not get worked up about it when things don't go to plan, as lets face it, that really doesn't seem likely.  So we were actually really good and just took this additional delay in our stride, like it was no big deal.  Are you impressed?

Then this morning I walked into the kitchen, pulled the cord on the blind to raise it and let in the bright sunshine and was utterly horrified to see that instead of going up, the blind decided to come down, and I don't mean the slats, I mean the whole thing.  Well, half of it any way.

As you can just about see from the photo below, one of the screws which was holding it in the ceiling came out, leaving the blind suspended by one single screw. 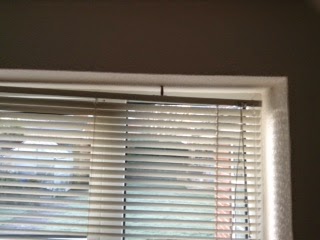 My first thought was 'My worktop!' as I imagined the whole thing coming tumbling down, unceremoniously landing with a thud on the windowsill and cracking the granite.  Given how hard it is to replace the piece that's already damaged, the last thing I need is to add more to the list.

So there I was standing in the middle of the kitchen, poised ready to catch the blind, or at least attempt to, before it hit the granite.  Fortunately, it stayed where it was, precariously perched as though just waiting for me to turn my back.

Thankfully the blind is now completely down, having been carefully removed, with much tugging and muttering.  It's sitting unhelpfully in the lounge, waiting for the fitters to come back and put it up again.  Given we've been waiting since November for them to come and fix it, as it was made the wrong length and wasn't put up straight in the first place, you can guess how impressed we are with them.