Book Review: Bride Without A Groom by Amy Lynch

Amy Lynch is an Irish author of humorous romantic women’s fiction, but not always with fairy tale endings! She has been working in the charity sector for many years, is married and has two young children. When she is not writing, she can be found juggling school runs, packing lunch boxes, tackling the laundry mountain and walking two large rescue dogs who stare at her until she walks them. Talk about multi-tasking!

Her debut novel ‘Bride Without a Groom’ is a laugh out loud Bridezilla comedy, was published by Avon, Harper Collins in May 2015. 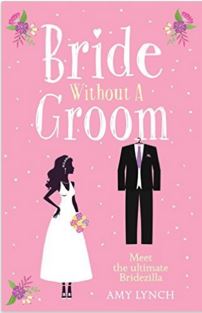 Single, coupled-up or married, this laugh-out-loud summer read is the perfect anecdote for the wedding season!

Rebecca has chosen the most luscious, five tiered, wedding cake. The engagement ring that she has selected is celebrity inspired. The wedding singer is on speed dial. He doesn’t usually do Michael Bolton, but as it’s for a first dance he’ll make an exception. Father Maguire is checking dates for the parish church as we speak. The deposit on the white sand honeymoon is paid for in full on Barry’s card. She has fallen for an ivory lace couture gown that is to die for. The down payment may require her to sell a left kidney, but it will be worth it. Isn’t that why you have two?

There’s one teeny tiny problem. It’s nothing, really. No need to panic! It’s just that Barry has yet to propose. Says he’s not ready! He can be a bit of a kill joy that way. In fact, he's gone away on a business trip and says that he needs some space. Meanwhile, Barry's tie loosens, the Tiger beer is flowing, and his colleague Shelley is providing more than a shoulder to cry on. Back in Dublin, Rebecca worries, putting Operation Win Back Barry into action. But who is the mysterious dark haired woman that is so keen to talk to her, and what is it that Barry wants to get off his chest?

I love the idea behind this novel; a woman so desperate to be a bride that she's planning her wedding before her boyfriend has even proposed. The result is one totally freaked out boyfriend, and a would be bride who's now not only missing a groom, but possibly even a boyfriend as her obsession sends Barry running.

This is a humourous entertaining novel that follows self-centred aspiring bride Rebecca. When her boyfriend discovers her secret scheming his cold feet and a well timed business trip mean Rebecca is left alone wondering if she's lost him for good.  Whilst most rationale women would see this as a wake up call, Rebecca just manages to get into even more trouble.

Overall I really enjoyed this book, Rebecca's scheming and her outrageous behaviour were hilarious.  The only reason I didn't give it 5 hearts was because I can't quite figure out how Rebecca still has a job. When I was a kid the only way I got a day off school was if I was really really sick.  There was no skiving in our household.  This dedicated workaholic approach seems to have been ingrained into me to the point that I found myself urging Harry to fire Rebecca.  Maybe my management approach is a little too harsh? Though it's a question I won't be asking my team. Like someone very wise once told me; 'Never ask a question that you don't want the answer to.'