Today I welcome Jack Steele, author of 'Loose Cannon', to my blog... 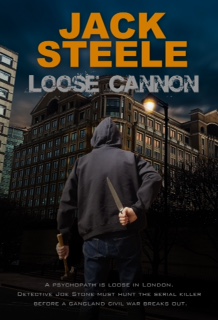 Capturing the essence of a location in my novels has become somewhat of a mini-obsession. It has to be detailed enough to transport the reader into that place but at the same time allow the mind to fill in the gaps and maintain the flow of the story.

I could make it up of course but for whatever reason there is the need for me to visit that location. In my novel ‘Loose Cannon’ I used a pub in Canary Wharf called ‘The Gun’. It has a room upstairs where Admiral Nelson and Lady Hamilton are said to have had their private meetings. They showed me around the pub so I could get a good feel for the place. The research gained from that one visit alone was enough to use in all of my future novels in the series. The compulsion to physically walk through the doors of a pub and enjoy a drink there….. is why I love research!

There are a few exceptions. For instance, there is a scene in ‘Loose Cannon’ where a daughter visits her father in prison. I’ve researched that scene instead of visiting Her Majesty’s Pleasure. Another exception is when a restaurant that I’ve visited closes down and a different building goes up in its place. Then I have to place that restaurant in a location where it isn’t actually there.

So why not use Google Earth or the Internet to walk a route instead of wearing out my shoe leather? It’s just a personal thing that I have to be there. It’s important to take in the sights and smells around Canary Wharf, ride the London Underground and visit buildings to get a feel for their inside as well as their surroundings outside.

Hackney is at the heart of the story because I was born and raised there. Surprisingly there are still a lot of the original buildings standing. The Churches, Fire Station, Bannister House Flats and the Hommerton Hospital are thankfully still there.

A characteristic of my books will be the chase scenes. I’m often dreaming of either being chased or I am chasing after someone. I really feel like I am there!

A friend told me that it’s best not to include passing the doctor’s surgery or the laundromat as it slows down the pace of the chase. I follow her advice even though I have sat in that doctor’s a long time ago or I have taken washing into that laundromat!

It’s all about the balance between what to include and what to leave out. I have been delighted with the reviews so far, many point out their enjoyment of the pacing of the novel. Where some may like a little more detail, others want less and the majority have mentioned that its spot on. So the positive reaction has spurred me on to write the sequel to my Crime Fiction novel ‘Loose Cannon’ which includes more pubs, more landmarks and another chase sequence. Last month I paid a visit to London so that I could witness these locations for real. I’m really excited about this book with all the familiar locations and the new ones which I have added and I’m happy to say, have now been thoroughly researched.

My thanks to Elaina James for this guest post on her impressive blog site.