Guest Blog: M W Arnold - A Wing And A Prayer 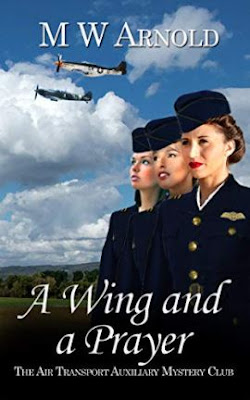 I’d never dreamt about becoming an author. Certainly, I’d had many dreams, most of which never came true, but I’d certainly never considered even writing a book.

Back when I was in the Royal Air Force, I went all over the world and read plenty of books during my travels, mostly Star Trek and fantasy, but predominantly, Terry Pratchett. I can still not get enough of this much missed man and author and even now, picking up one of his books will be enough to put a smile on my face. The most I’d ever put to paper was when I was writing a report at work, or filling out a travel claim. I suppose various ideas for stories did pop into my head, but obviously nothing which was enough to ignite a spark of creativity.

Nothing much changed, even when I left the RAF and took the plunge into civvie-street, though Mr Pratchett was always there to comfort me. Then, I think it was around 2013, I read a book which I was asked to read by my lady wife; then I read it again straight after I’d finished it. The next morning, from who knows where, I felt the inclination to set up my old laptop and I began to jot down some ideas for a story. Before the day was out, I was something like 3,000 words into a story, and a romance at that!

With no idea where this had come from or where it was going, if anywhere, I kept tapping away and eventually, six odd months later, that first book was finished. This remains tucked in a metaphorical drawer on my hard drive. Whilst writing it, I stumbled across the Romantic Novelist’s Association and was lucky enough to become a member. When it came to attending my first conference, I had to put back on my actor’s hat. You see, I hate crowds and by crowds, I mean being around more than one or two people, it scares the wits out of me. So, I gathered up all the courage I could and drove up to Sheffield. I rapidly discovered that the men present were dramatically outnumbered by the women and I was at first mistaken for someone’s husband or boyfriend. I nearly packed up and drove away a number of times but I’d become drawn in by the talks I was attending and the authors I managed to talk to.

I came away from that conference with a new dream; of becoming published. I knew it wouldn’t be an easy journey as there are plenty of people who were on the RNA’s New Writer’s Scheme back then who are still waiting to get that first contract nevertheless I wanted this and so set too on a new story to see where that took me. Somewhat to my surprise, this was published in 2017 by a small American publisher.

Fate then decided to get in the way and my fledgling writing career stalled as my health took a downturn. It took me a good year and a bit to get things back into some semblance of an order. What helped get me through was the support of my author friends who encouraged me to begin writing again and, gradually, that’s what I did. The lockdown which is just ending hasn’t helped my fear of people, but I am looking forward to speaking to other authors in person again, especially as I seem to have changed writing genres.

Sometime this year, I will be publishing my third and fourth books, having written and published my first World War 2 Historical Saga during this pandemic. Considering I’d read predominantly romance books for a number of years, I was as surprised as everyone else to find myself switching genres. ‘A Wing and a Prayer’ came out November 2020 on The Wild Rose Press and has done quite well. I’m about to plough into the edits for book 2 of what’s become the ‘Broken Wings’ series, ‘Wild Blue Yonder’, with book 3 due out before Christmas, ‘I’ll be Home for Christmas’.

So, for someone who would like nothing better than to keep to the background, I now find myself in a profession where part of the deal is keeping myself in the public eye, not something which I’m entirely comfortable with, but which I’m getting slowly used to.

‘A Wing and a Prayer’ purchase links: