Book Review: Girl on the Run by Rhoda Baxter 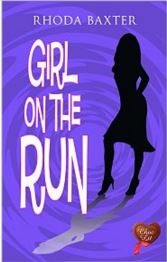 The story follows Jane, the ex-girlfriend of a famous musician, as she tries to flee from the lime light and create a life of her own after she catches him with another woman.  However one celebrity gossip magazine just won’t let her go…

The insertion of snippets from the magazine that’s determined to find her and the use of texts and emails through the story was and interesting and clever idea. I was a little apprehensive about reading emails in the middle of a story at first, but I have to admit it worked really well.  It was carefully balanced so it wasn’t overdone, but it was sufficient to give the reader an insight into what was going on beyond the characters verbal conversations.

It’s a great story with a strong cast of characters.  It covers friendships, family (I love the relationship between Marsh and Stevie), the pitfalls of fame, as well as office rivalry and the perils of office romances.  What more could you want?

I raced through the book desperate to find out if Jane’s identity would be revealed and how her new friends and colleagues would treat her if they knew it was her in pages of the magazine they all loved to read.  But most importantly I desperately wanted to know if Jane could be the woman that tempted Marsh to risk another office romance…