With Halloween just around the corner I'm welcoming Louise Marley to the blog for a spooky themed post...

The Ghosts of Conwy


A tale of ghoulies and ghosties, and four-leggedy beasties …

And a monk who likes a pint in the night …


There was once a Cistercian abbey here in Conwy, which had to be moved to make way for Edward I and his new castle. But despite Edward I’s best efforts at relocating the monks, it appears some of them might have never actually left.

The Abbey of Aberconwy was founded in the 12th Century and built on land donated by Llywelyn the Great. It became the burial place for many of the princes of Gwynedd, including Llywelyn and his sons, but after Edward I conquered Wales and built Conwy Castle, the abbey was forced to relocate to Maenan in the Conwy Valley – and they took Llywelyn’s remains with them! So if anyone was going to haunt the town, Llywelyn would surely be a prime candidate – his revenge for not being allowed to rest in peace. But as it turns out, Llywelyn is just about the only spirit who doesn’t haunt Conwy.

The most famous ghost story centres on Plas Mawr a 16th century town house built by Robert Wynn. There are several different versions of this tale; a few even ascribe the haunting to the castle itself. The story goes that while the master of the house is away (sometimes it’s Robert Wynn himself, sometimes merely a descendant), his heavily pregnant wife and young child take to going up the narrow, twisting steps of the watch tower to look out for his return. You just know this isn’t going to end well and, sure enough, one evening the lady suffers a terrible fall while carrying the child, and both are mortally injured. A doctor is sent for but says he can do nothing to help them. A servant, worried what the master will say, locks the doctor in the room before he can leave. When the master returns, and the servant finally unlocks the door, the woman and her child are both dead and the doctor has vanished. The master, distraught with grief, kills himself. His ghost can still be heard pacing up and down, trying to find the missing doctor.

This story, in various forms, appears in several ‘true-life’ ghost books, particularly in the latter part of the last century. And because it doesn’t appear in any of the records much before the early 1900s, it’s a bit of a clue this story may have been, shall we say ‘embellished’; OK probably completely made up. Sorry!

However, while Plas Mawr has one very famous ghost (possibly two; there’s a theory the poor doctor perished while trying to escape up the chimney!), Conwy Castle is practically overrunning with them. It withstood a siege in 1295, and another one during the English Civil War in 1649, so it’s hardly surprising it should be home to a few disgruntled ghosts. Visitors have reported the distinct scent of incense in the castle chapel, and the silhouette of a man wearing armour looking out through one of the castle windows – backlit by flickering candlelight. A cloaked figure has been seen stalking the battlements and the ghost of a monk likes to watch the tourists walk around the castle.

Down by the quayside ghostly monks have also been spotted at The Liverpool Arms pub (insert your own joke about spirits here), which backs onto the medieval town walls. Another monk (or possibly the same one?) enjoys walking along the quayside and through the churchyard at night. Slightly randomly, the churchyard is also home to a ghostly cat.

A second ghostly cat haunts the neighbouring Castle Hotel – apparently he likes to make himself comfortable on the beds. No one has ever seen him, just felt him walk over their feet … And the hotel is also home to the spirit of a chambermaid, upset at being buried in the churchyard rather than taken back to her home village on Anglesey. Even after her body was relocated, she continues to haunt the hotel … 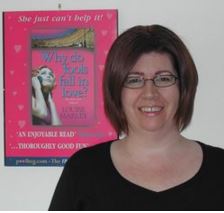 Louise Marley writes romantic comedy and romantic suspense. She lives in Wales, surrounded by fields of sheep, and has a beautiful view of Snowdon from her window. Her first published novel was Smoke Gets in Your Eyes, which was a finalist in Poolbeg’s Write a Bestsellercompetition. She has also written articles for the Irish press and short stories for UK women’s magazines such as Take a Break and My Weekly. Her latest book is Something Wicked. 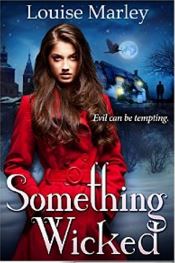 
Evil can be tempting …

Katrina Davenport has opened a coffee shop and bookstore at the notorious Raven’s Cottage, once the home of a 17th century witch known as Magik Meg. The locals have told Kat stories, of how the cottage is haunted by the witch and her demon lover, but Kat doesn’t believe in witches, or ghosts, or anything going bump in the dead of night. Every strange occurrence must have a perfectly logical explanation.

Unfortunately it doesn’t really matter what Kat believes, because something wicked has returned to Raven’s Cottage …

And this time it’s come for Kat.