Nothing but the truth: when a novelist writes non-fiction by Helen Barrel 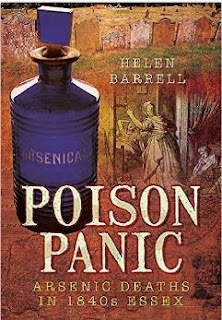 I’d always written fiction. If you’d said to me, “the first published book with your name on the cover will be non-fiction,” I wouldn’t have believed you. But so it is. There might seem to be a gaping chasm between the two forms; airy-fairy imaginative stories over on the fiction side, and on the non-fiction side, a desert of hard, dry fact. But I’ve found that my background in fiction has come in very handy for writing non-fiction, and I’ll explain why.

By signing the contract for Poison Panic, I was promising Pen and Sword, my publisher, that I would write 60,000 words. I thought back to the longest piece of non-fiction I’d written up until that point – my undergraduate dissertation on Agatha Christie (can you see a theme developing?) – and that was 12,000 words. How the heck was I going to write 60,000? But it didn’t scare me.  Although none of my novels have ever been published, apart from a self-published spy thriller back in the late 1990s (when self-publishing meant ‘photocopied’), I’d at least managed to complete them. Some were easily twice as long as 60,000 words, so each time I stared blankly at my computer and the Doubting Gremlins whispered mean things in my ears (Imposter Syndrome is very unkind), I would tell myself, “I might not have completed non-fiction this long before, but I’ve written novels that are much longer - I can do it!” I had to remind myself that I did have the discipline to sit down and write the bloody thing.

I knew I’d ‘got’ Poison Panic when I started to dream about it. This is something that happens to me with fiction, too – in fact, my fiction often comes out of my dreams. But with Poison Panic, once I’d had a dream that I was in Mary May’s kitchen, and that a rat had scurried over my foot, and that I watched Mary put arsenic down to kill the rodents plaguing her cottage, the book entered the space in my head where my novels germinate and grow. I’m currently writing Fatal Evidence, the biography of nineteenth-century forensic scientist Alfred Swaine Taylor, and I realised I’d ‘got’ him once I had a very odd dream where he was sitting at my desk!

This doesn’t mean I added anything to my non-fiction – Poison Panic is based entirely on primary historical sources, such as newspaper reports – but it meant I could get a feel for the people in the book. They became more rounded in my mind, not just stock characters – ‘middle-aged farm labourer’s wife’ – but a living, breathing woman from the nineteenth-century. I could close my eyes and see them laugh or cry, see them stare stonily ahead as they stood in the dock, or collapse in terror on the scaffold.

I grew up in north-east Essex, where part of Poison Panic is set, so by adding some set-dressing to my memories (carriages, bonnets, smoke spiralling up from chimneys), I was able to create an 1840s version of Essex in my mind that I could populate with the ‘real’ people I had met in my research.
Being a daydreamer no doubt helps. Stuck in a traffic jam on the bus? Let’s retreat into Poison Panic Land and find out if that arsenic has sorted out the rodent problem yet….

If you’re writing fiction, then there’s workshops, weekend retreats, residential courses, manuscript critique, and editing services. I’m sure there must be some for non-fiction, but it’s the fiction ones which seem to be proliferate.

While I was a student, I was very lucky to have one-to-one mentoring sessions with novelist William Palmer, courtesy of the Royal Literary Fund (yes, he has the same name as The Rugeley Poisoner). I took my novel to him (jazz singer framed for murder… that theme yet again) and he taught me how to be brave and edit my work. Not just juggle between *this* layout of a sentence, or *that* tense, but put a big line through that paragraph, tear out this page, and heck, get rid of this chapter! As
Poison Panic spilled out of my fingertips and into Scrivener, I hammered it about, using the same fearlessness that William had instilled in me as a student. Can you explain this in a sentence, rather than this terrible, waffly paragraph? Yes. Then do it. For heaven’s sake, do it.

More recently, I attended Alison May’s ‘Developing YourNovel’ day-long workshop. We learnt about such things as character, the three-act structure, how to edit, the point-of-no-return, the darkest moment, and how to write a synopsis. All extremely useful stuff for someone writing a novel, but how, you might wonder, is this any use for non-fiction?

Whilst I can’t add my own characters to non-fiction (though some writers do), thinking about characterisation in fiction was a good way to breathe life into the real people in my book. There’s tricks which fiction-writers use for presenting characters in particular ways, and, by collating my facts in a certain manner, I was able to show the reader how I see these characters – based on my research.

There’s nothing I can do about the point-of-no-return not appearing in the middle of the book, where you expect it to fall in novels and films. It’s non-fiction, for heaven’s sake! That said, some true crimes deal with this by, for instance, having the protagonist’s arrest fall at the halfway point. Dealing with several different cases, it just wasn’t possible to do this with Poison Panic. But there’s a certain sense of doom that hovers over the point-of-no-return, and I tried to emulate this. Equally, each chapter is about a separate case, so in theory I could’ve had a point-of-no-return in the middle of each chapter, but I didn’t consciously set out to do that.

I was commissioned to write Poison Panic a couple of months after I attended Alison’s workshop. Her advice on synopsis-writing did help – I was asked to pitch an idea, and it was later that I realised what I’d written was, essentially, a short synopsis. When I was ready to pitch Fatal Evidence, I followed the publisher’s submission guidelines to the letter, and bore Alison’s advice in mind. They commissioned Fatal Evidence the day after I sent my submission.

A synopsis needs a hook – it’s vital whether it’s fiction or non-fiction. Why should a publisher or agent be interested in what you’ve written, or what you propose to write? And as well as the synopsis, there’s the elevator pitch. Alison forced one out of me for a novel which I initially couldn’t describe in one paragraph, but by the end of the workshop, I could explain in a sentence. Being able to distil down tens of thousands of words into a one-sentence hook is a skill you’ll learn at a novel-writing workshop, and it’s essential for writing non-fiction too.

As you might imagine, writing a book about real poisoning cases requires a lot of research, and how you express it is key. Writing non-fiction, you could get away with flinging all the facts at the page in a vaguely chronological order, with a bit of commentary here and there. But I’m very conscious of the fact that I’m writing for the general reader, and if someone has picked up my book because they think it looks interesting, the worst thing I can do is present all this information in a way that sends them to sleep. I’m encroaching on their spare time, even if, by picking up my book, they’ve invited me in.

I researched my fiction: rifling (the ‘fingerprints’ of a gun barrel left on a bullet), stagecoach timetables, what music the BBC played on the radio on New Year’s Eve 1935, on and on it goes. But I don’t chuck these facts at the reader: one must always avoid the Information Dump! I might be able to weave the facts in somehow – they might, after all, be crucial to the plot. But a lot of it might be background information which I need to know in order to confidently handle the story I’m telling, but I don’t need to bludgeon my readers over the head with.

This is where reading over your own work is important, that point where you leave it for a few days – a few weeks, or even longer (if you have the time… a slight problem if a deadline is bearing down on you). This is something I learnt from writing fiction. There were some points in Poison Panic where, when I came to read over it, the narrative slowed down, caught up in an undertow of facts. Yes, facts are important, but if you think it’s going to annoy your readers, you need to address it. Can you express these facts in a different way? Maybe the tone of the passage is too stuffy, or the information isn’t explained clearly. Is there an angle here which can be amplified to make it interesting and keep the reader engaged? Maybe there’s something which you think is interesting, but as far as the narrative is concerned, doesn’t really earn its place in the book. In this situation, non-fiction has the benefit of footnotes or references, which fiction (apart from The French Lieutenant’s Woman) doesn’t have.

For instance, it was important in Poison Panic that I explained how many children Mary May had had, and when. I started off with a bullet-pointed list of their baptisms and burials, then tried to turn it into a paragraph, but I got annoyed by how clunky it looked. It was an ugly mass of dates which didn’t really mean much. So instead, I wrote an overview in a couple of sentences, and put the list of baptisms and burials in the references at the back. The information is therefore supplied for the reader, but it’s not clogging up the narrative pace.

I must confess that there is a lot going on in Poison Panic, but writing for a general reader, I can’t assume anything about people’s prior knowledge on arsenic or indeed the nineteenth-century. If you’re writing a nineteenth-century police procedural novel, you don’t need a page explaining the Rural Constabularies Acts of 1839 and 1840. If you think it’s important, you have the freedom to, perhaps, invent a conversation, where your character talks about becoming a policeman following the Acts. Writing non-fiction, I cannot do this, but I can include a photograph of square-jawed PC Barnard of the Essex Constabulary in his steel-reinforced top hat. You probably can’t do that in a novel, but you might have Barnard’s photo as your computer’s wallpaper for inspiration as you write.

It follows, of course, that writing non-fiction benefits writing fiction, but I’ll spare you for now. Back to your work-in-progress – scram!