This week's guest is author Christina Hollis, sharing her story about facing her fears when she decided to stick to her new year's resolution: 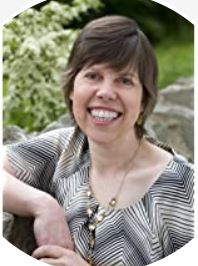 Until recently, I couldn’t say boo to a koala, let alone a goose. That all changed when I discovered — after it was far too late to back out! — that keeping one of my New Year’s Resolutions meant facing several of my fears all at once.

I’d been writing romance for a long time and loving it when Pen and Sword Books asked me to write a non-fiction book about the women of Bristol. Much as I enjoy the romance genre, I agreed to the Pen and Sword offer as a few weeks earlier, I’d made a New Year’s Resolution to say “yes” to every new opportunity.

This commission was my chance to get back to my roots in more ways than one. I began my career by writing non-fiction articles for magazines, and I’d be revisiting my family’s origins, too.

I was born on the Somerset side of Bristol. Every Saturday we visited my grandparents who lived on the Gloucestershire side of the city, so I knew it well.

I did lots of planning and was ready to start on the research for what would become Struggle and Suffrage in Bristol when I realised that this project would mean meeting a lot of new people and talking to them.

That might not seem like much to you, but it stopped me in my tracks. I like predictability and routine, so spontaneous social interaction is difficult for me. One of the reasons I became a full-time writer was because it gave me the perfect excuse to hide at home all day.

While I love inventing fictional people, real ones are a complete mystery to me. They are unpredictable, and often noisy. That’s something else I’m not keen on! I live half a mile from the nearest road, and it’s so quiet here that unless the birds are singing, you don’t just hear a pin drop—you hear the air rushing past as it falls.

Rather than waste time commuting every day and hunting for a parking space, I booked into an hotel in the centre of Bristol for a preliminary week-long research trip.

After a sleepless night and a potholed journey into the city, my nerves were in shreds by the time I checked in to my hotel.  The level of noise in the reception area was bad. Crossing the busy city centre to look for the Bristol Archive, it was worse. Cyclists and skateboarders weaving among the pedestrians added a whole new level of horrible to my experience.

I felt like a salmon swimming against a riptide of people who all knew where they were going. I just wanted to put my hands over my ears, scuttle back to the hotel, and abandon any idea of writing a book.

Only the thought of how good it would feel to keep my New Year’s Resolution kept me going.

I was so glad I made the effort. Once inside the Bristol archive, I was hooked. You know how you go on the internet to look up a simple recipe, or a single crossword clue, but then follow a breadcrumb trail of links, ads, and listicles until suddenly you’ve been surfing for an hour? Well, that—but my experience was even better as I was dealing with diaries, photographs, and other artifacts that had been owned and handled by real people.

The archive staff were all so knowledgeable and keen to help me, I found it easy to talk to them. Working with them over the following months buoyed my confidence to the point where I managed to interview some living, breathing Bristol women, face to face. Me, talking to strangers! Who’d have thought? They told me all sorts of stories about the Blitz, growing up in Bristol at a time of rationing, and seeing life change through the nineteen forties and fifties. I included some of their stories in Struggle and Suffrage in Bristol, along with many others I discovered among the stacks of the Bristol archive.

One of the women from an earlier age, Ada Vachell, is an inspiration to nervous people everywhere. Born in 1866, she never let anything hold her back. As a child, Ada nearly died from scarlet fever which left her frail and deaf. Luckily, her iron will —and her father’s money—helped her to make the best of things. She became a champion of the disabled at a time when anyone with physical or mental problems was shunned and hidden away.

Using her status as the daughter of a wealthy man Ada charmed money from rich donors to create a club called the Guild of the Brave Poor Things, where disabled adults and children could go for recreation, company, and education. The Guild helped many to find good jobs and built a holiday house at the seaside where members could spend time enjoying a break from city life.

Despite initial opposition, the Guild thrived. It grew to be a great force for good in Bristol at a time when disabled people had no voice, as society only valued the able-bodied. Though she was small and sickly, Ada battled constantly to give her friends the Guild members opportunities that would otherwise be denied to them by disease, injury, or accident of birth.

The whole process of researching Struggle and Suffrage in Bristol was fascinating. I enjoyed the background work almost as much as I enjoyed writing up my notes so when the book was finished, I signed up for an MA in Creative and Critical writing at the University of Gloucestershire. As I had left school at sixteen with only a few mis-matched qualifications, you can imagine how pleased I was to graduate with distinction!

I came so close to giving in and running away on that first day in Bristol. If I hadn’t faced my fears, I would have missed out on some amazing experiences, so never be afraid to take a step into the unknown. It could lead you in all sorts of new and exciting directions! 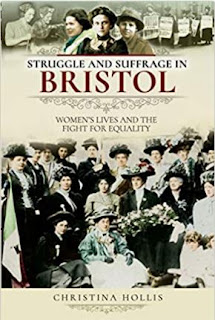 Link to Struggle and Suffrage in Bristol: http://bit.ly/SSBRISTOL

About the Author: Christina Hollis

Christina Hollis was born in Somerset, and after leaving school at sixteen had a series of lowly clerical jobs before becoming a full-time writer. After several years producing non-fiction articles and photographs for national magazines, she wrote historical novels for Harlequin’s Masquerade imprint before turning to short stories. She reached the shortlist of the BBC New Writers competition, and her fiction has appeared in publications such as The People’s Friend.

She wrote contemporary romance for both Mills and Boon and The Wild Rose Press before writing Struggle and Suffrage in Bristol for Pen and Sword Books. She then gained an MA in Creative and Critical Writing as a mature student and is currently working toward a PhD.

A member of both the Society of Authors and the Romantic Novelists’ Association, Christina is a Reader for the RNA’s New Writers’ Scheme. She lives in the Gloucestershire countryside, with her family and a variety of pets and livestock.