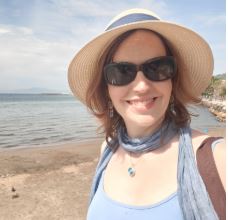 I was the kid who was always making up stories and poems for fun. Yep, not homework, just for fun. However, strangely I chose a completely different career path, I’m an accountant (not really much call for creativity there).

Looking back now, I’m not sure why, possibly because writing for me was such fun it was ingrained in my brain as being a hobby, not something serious. I never stopped writing though. I have note books filled with song lyrics, poems and story ideas. Some I’m incredibly proud of, some, well we’ll just put those to the bottom of the pile shall we…

In Autumn 2013 I had a bit of a brain wave… potentially. I decided that the story that had been running through my head for, well let’s just say a while, should be written down. This revelation occurred to me in the middle of a sleepless night, which is quite fitting given this is when I also made up most of the story. I’m a worrier. When I can’t sleep I worry. I think about something that happened the previous day, rehashing what I should have done differently, or worrying about the big meeting I have in the morning.

The end result of all my worrying is that not a lot of sleeping gets done and I’m tired and stressed come sunrise. My solution is to daydream. It’s not necessarily the most successful method of encouraging sleep, as I have a tendency to get so caught up in my daydreams that I can actually end up keeping myself awake, but on the plus side, I’m no longer stressed the next day. Tired potentially, but not stressed and irritable.

After my middle of the night bolt of inspiration, at lunch the next day I pulled out my note book and carried on writing. Somehow my middle of the night daydreaming sessions had now encroached into real life. As that realisation struck me, I suddenly began to question the sanity of my brain wave. I was writing a book. Like a whole book. Not just a song lyric or a short story, but a book. Did I even have enough ideas to fill a book, no of course not, that just wasn’t realistic… was it?

I’m not sure if I was driven by the desire to prove myself right, or prove myself wrong, but I decided to jot down chapter ideas and see how many I’d get. I wrote them down, rearranged them, counted them up and stared at them in disbelief. Eighteen. How on earth had I got ideas for eighteen chapters? I hadn't even really thought about them, I’d just written down the ideas that were already floating around in my head. Wow. I was kind of amazed, and kind of concerned… just how many sleepless nights did I have anyway?

So that was it, suddenly my crazy idea didn’t seem quite so crazy.

Well no, it still seemed crazy, but now it seemed more achievable. I picked up my pen and started writing again. I discovered along the way, that doing so was completely and utterly addictive…