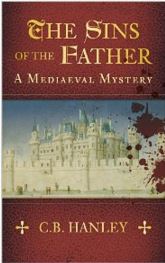 C.B. Hanley has a PhD in medieval studies from the University of Sheffield.  She has written both fiction and non-fiction books and specialises in the High Middle Ages.

Set in England in 1217, Sins of the Father follows Edwin Weaver, the son of the bailiff at Conisbrough Castle, who finds himself thrust into an unfamiliar world when his father is taken ill and the Earl asks him to step into his role. In the midst of the civil war, Edwin is tasked with solving a murder in just two days…

C.B. Hanley’s extensive knowledge and research shows through in this gripping medieval mystery. The descriptions and characters are captivating and catapult the reader back in time, into the realm of castles, knights and sword fights.


The novel moves forward at a steady pace, drawing the reader in as we follow Edwin’s investigation. By seeing the castle, the Earl and his family, the knights and the impending battle of the civil war through Edwin’s eyes, C.B. Hanley cleverly enables us to learn with Edwin. The history and explanations of the workings of the castle and its subjects are fitted discreetly into the story, enabling the reader to gradually understand this world as Edwin does.


The relationships between the characters are moving and the mystery is enthralling. The plot twists kept me guessing throughout the entire book, until the surprising, yet gratifying conclusion as all the pieces fall together and the murderer is revealed.