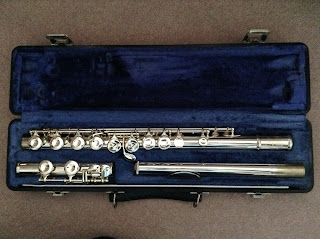 It’s funny how one event can cause you to change your plans for the future.  When I was little I had always dreamed of being a musician.  I played three instruments (flute, clarinet and piano), I was part of the school orchestra and the community wind band. Whilst my friends were busy chasing one another around the playground, I was chasing after my dream.  However, after my singing career failed to launch I discovered something new about myself... I suffered from stage fright.

I was fine during rehearsals.  I was reasonably okay performing on stage in the orchestra, (there were enough of us to be fairly confident that I wouldn’t be abandoned in a solo again). But as a solo performer, even when I intended upfront to be one, stage fright kicked in.

I revised my plans as a result.  Performance was no longer a realistic career objective. Instead I decided I wanted to teach others how to play. It seemed the ideal solution, enabling me to continue to play the music I loved and ensure there were no spot lights pointed in my direction.

I continued on to college as planned.  Despite my change in career I was still keen to study for A level music. I was adamant that it would help me on my new career path.  It would teach me music history, style, genre, composition and so much more. There was just one problem that I had overlooked.  It also required me to make solo performances at regular concerts.

On the day of the first concert my school debut continued to haunt me.  The faces in the audience all blurred against the bright spot light that shone down on me.  The notes on the sheet music danced on the page. Even the fact that I didn’t really need the music as I knew it all by heart was no help, as my memory deserted me alone on stage just as my friends had done all those years ago.

Somehow I made it through.  My fingers found the right keys, mostly. The audience clapped, possibly out of relief rather than praise. I fled from the stage vowing never to return.  Except of course I had to. The next concert was already scheduled and participation was a requirement of the A level.

I lost count of how many times I contemplated quitting that A level and seeking refuge in something that would enable me to remain safety seated behind a desk. I didn’t quit though. I persevered. My desire to be a music teacher kept me pushing though my fears.

It turned out that Mum’s old advice about facing your fears to overcome them was a little misleading though. No matter how many times I faced them, my fears didn’t get any less.  I wasn’t really overcoming them. I was just surviving them. In the process I became a better actress.  My fears didn’t show behind my pink blush lipstick smile. The shine in my eyes was mistaken for excitement instead of apprehension. I was faking it, but I was good at it.

The lesson I learnt from this experience was to keep going. Keep striving towards your goals even when you don’t feel like you’re making any progress. It will pay off in the end.  I have the A level certificate to prove it.  A bit of bravado can get you a long way. Not too much so that you come across conceited and full of yourself, but enough to make you look like you belong and you know what you’re doing. Even if the truth of it is that you’re completely winging it and hanging on by your finger nails.