Today's guest is the lovely Morton Gray. Morton was the first person I met when I joined the Romantic Novelists' Association. We chatted on the RNA facebook group and in a strange coincidence it turned out she was also a member of the Birmingham chapter, so when I attended my very first meeting I already had a wonderful and supportive friend. I'm so happy to welcome Morton to the blog to share her amazing and inspirational journey: 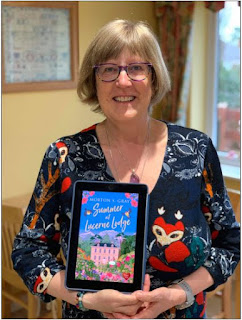 I am a firm believer that if you have a dream and are willing to face your fears you can achieve it. Acquaintances probably see me as a confident individual, who has changed direction at least twice in her life. Little do they know about the lurking insecurities.

Rewind to 1990 and I was facing divorce and thus solo parenthood. I had worked hard at my career and earned a good salary, thankfully had a wonderful childminder to look after my son, but as you can imagine I felt pretty low and stressed with the juggling of parenthood, house and career, especially when I was transferred to an office thirty minutes’ drive away. I knew I couldn’t continue with the pace of the life I was living at that point, I’d already begun to have chest pains and had put on lots of weight with comfort eating. But when you have a child to support and a mortgage to pay, change can feel like an impossibility. It was hamster on the wheel time.

My sister introduced me to a homeopath to help with my eczema and she became a friend. She suggested we go to an evening class together which was half aerobics and half the philosophy of a positive thinking teacher – Louise Hay (who has sadly since died!). On the surface it sounds strange, but that evening class set me up to make changes in my life.

I decided to train as a teacher of the Louise Hay philosophy and found myself on a course in Stroud in Gloucestershire with thirty-two other people from all over the world. The course was all about letting go of negative beliefs and repeating positive affirmations in their place. The book by Louise Hay that really helped me is called The Power is Within You. I can’t remember a week before where I laughed and cried so much. Other participants included a couple of hypnotherapists and people who practiced Reiki therapy. After the eight day course, I drove back up the motorway and resolved that I would train in both of these therapies.

You can tell the impact that the course had on me and my way of being – my one work colleague asked if I had found a man when I returned to the office!!!! 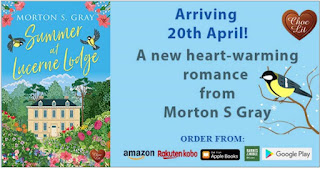 I did train in both clinical hypnotherapy and Reiki on the weekends when my ex had my son. After asking my mother if she would back stop my mortgage payments for a couple of months if I got into a mess and had to get a job, I took the plunge, leaving my secure full-time job and salary. Ironically, I was due two weeks holiday and had a month notice period, so after sixteen years, I left after two weeks. I set myself up as a therapist and ran various positive thinking courses. I trained in energy field therapy too and almost unbelievably won a year’s course to learn acupressure massage from a health magazine competition. I never looked back and didn’t need my mother to bail me out. That was change one.

Fast forward a few years. I had dated during my time as a therapist, but ran a mile if anyone seemed remotely serious, until I met my second husband (I met him online and fell in love with him from his photograph, but that’s another story). I never imagined I would have another child, but I gave birth aged 45 to my second son. Unfortunately, I wasn’t well for a while afterwards and stopped working as a therapist, but that’s when I discovered writing and began change two.

My new dream was to be a published author. It wasn’t really a new dream, because I wrote my first ever novel aged fourteen. I remember giving that manuscript to a school-friend to read. The Sidanion has a tall ship, a pirate and a feisty heroine. I still have the handwritten pages. Life got in the way of writing for all of those years, but now I was serious about being a published author.

I honestly don’t think it is a bad thing to come to writing later in life, after all you have so much more material to work with. Many of my life experiences make their way into my writing.

Attending a weekly creative writing class with a friend, I began to enter competitions. I won a short story competition, came second in a flash fiction one, was a finalist at the Festival of Romance with a first chapter of a novel and then won Choc Lit Publishing’s Search for a Star competition in 2016 with the novel that became The Girl on the Beach.

I’m just about to publish my sixth book for Choc Lit. Summer at Lucerne Lodge is out on 20 April 2021. Its never too late to change direction and follow another dream! If you begin to doubt please listen to the Katy Perry song Daisies – I’ve adopted it as my theme tune.

Morton loves learning new things and these often end up in her books. Crocheting blankets, making her own perfumed soap and weaving have kept her sane during lockdown. She has been tracing her family tree for many years and is fascinated by the new avenues of research opened up by genealogical DNA testing. When she writes fiction, she enjoys the process of solving a mystery that links her characters. Her sixth novel for Choc Lit Publishing, Summer at Lucerne Lodge is published on 20 April 2021. Her books are stand-alone titles that can be read in any order, but are linked by her fictional seaside town of Borteen. 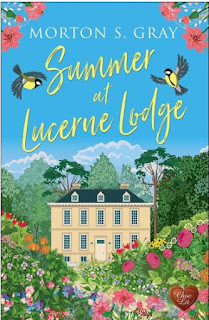 About Summer at Lucerne Lodge published by Choc Lit on 20 April 2021.

Could a beautiful old house and a handsome stranger hold the key to a life-changing secret?

Rosie Phillips could be forgiven for not being immediately won over by Tanner Bryant. After all, their first meeting involves him knocking a tray of prawn cocktail over her very expensive dress at a charity event in the grounds of Lucerne Lodge.

But little does Rosie know how pivotal that awkward first meeting will be, or how the Lodge will become the unexpected backdrop for a summer spent finding out who she really is, and who she could be ...

To keep in touch with Morton you can use the following links: