Today I have great pleasure in welcoming the talented Kim Nash to the blog to launch the first in my guest blog series on Chasing Dreams. 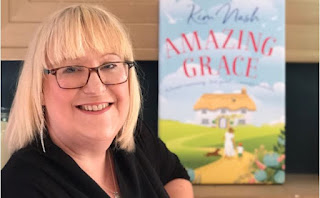 You Are Never Too Old To Follow Your Dreams

I was 50 years old when my debut novel was published.

I was the little girl who dreamed of being an author one day, but thought that to be an author, you had to live in a big house by the coast, and your writing desk had a delightful view over a beautifully tended garden with masses of vibrant, multi-coloured flowers and close-cut, emerald-green grass which looked out over the sea.  That’s where I thought the muse would strike.

When my Mom died, I wrote my things down. I found it cathartic and I wrote about my innermost feelings that I couldn’t share with my family at that time, because I didn’t want to upset them anymore than they already were. I wrote what I thought Mom would say to me if she could talk to me from heaven.  I kept it on my computer and years later I showed it to my sister.  It made her cry.

Years later, once my son had grown up and I had a bit more spare time on my hands, I came back to it.  For some reason after years of saying to people ‘one day I’d love to write a book’, I realised that the only way this book of mine was ever going to get written was if I got off my backside and bloody write it.

By this time, I was heavily into my book blogging.  Through that, and the fact that I’d somehow blagged myself a job in the publishing world, I had met so many authors, some mega famous that I’d been a reader and fan of for year, and some not so well-know but the one thing that I realised was that these were people just like me.  People who had a dream once, to write a book and then maybe some more, but the difference between them and me, was that they had made it happen.

It was those authors, that I was surrounded by on a daily basis, those authors who were living their dream day in day out, that motivated me and supported me to write.  I remember author Caroline Mitchell sending me a gorgeous notebook and in the front, she’d written a lovely message telling me to follow my dreams.  So many others like Angie Marsons also paid a big part in encouraging me. Cathy Bramley helped me when I was stuck with a plot hole.  Miranda Dickinson invited me along to workshops.

Petrified to think that I had got above my station in life, and to think I could be an author, I didn’t really tell people I was writing.  I didn’t want them to laugh at me.  I didn’t want to fail and for me to look like a fool.  I felt like I was too old to put myself through all that. Self-doubt crept in and I didn’t know if I could do it.

But, fired up by all these wonderful people in my life, I put my big girl pants on, and I gave up time when I would usually maybe watch tv, and I would listen to podcasts by writers and for writers.  I read books about writing. I talked about writing.  I devoured everything I could get my hands on, but then I also did the work.

I WROTE! And I wrote some more.

On March 30th 2021, my fourth novel was published.  And this post is to encourage anyone out there who has a dream, to go and follow your dream. Don’t worry what other people think.  Does it really matter? And if people laugh at you – are they your friends.

“You're the average of the five people spend the most time with,” is a quote attributed most often to motivational speaker Jim Rohn.  Surround yourself with the people who will lift you, motivate you, support you.  Those who will be happy for you when you have success.

Find your tribe and go and follow those dreams.

Her book Sunshine and Second Chances, was shortlisted for the 2020 Amazon Kindle Storyteller Award.

Moonlight Over Muddleford Cove, was published on 30th March 2021.

She lives in Staffordshire with son Ollie and English Setter rescue dog Roni, is Head of Publicity for publisher Bookouture (part of Hachette UK) and is a book blogger at www.kimthebookworm.co.uk.

When she's not working or writing, and in non-Covid times, Kim can be found walking her dog at Cannock Chase, reading, writing, standing on the sidelines of a football pitch cheering on Ollie, and binge watching box sets on the TV. She's also quite partial to a spa day and a gin and tonic (not at the same time!) Kim also runs a book club in Cannock, Staffs and organises local and national reader/author events. 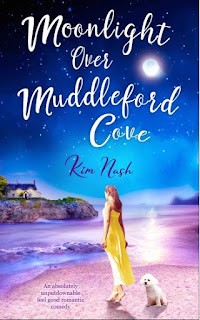 When thirty-four-year-old Nellie Wagstaff loses her job and discovers her fiancé is a cheating scumbag in a single day, she feels like the world has come crashing down. And that’s before the solicitor’s letter, along with a request to visit a place she hasn’t thought about for a very long time.

Heartbroken, Nellie escapes to the beautiful seaside town of Muddleford in Dorset, where she discovers she’s inherited more than she ever bargained for. Nellie never knew why her mother stopped talking to her sister, but now childhood memories of Muddleford come flooding back: long hot summers, the sea glistening beyond the sandy cove... and a stolen kiss with a boy called Jack.

Jack, now a devilishly handsome vet, has the local pet owners swooning over him, and as Nellie and he become close once more, and she gets used to gossiping with the locals and sipping wine at her beach hut with sand between her toes, she’s sure she can feel sparks flying once more. But just as she thinks she might be able to open her heart again, her newest frenemy, the glamourous Natalia, tells her a secret about Jack that changes everything.

Nellie will never know why her mother and aunt parted ways. She’ll sell the house, forget about Jack, and get back to real life. Because there’s nothing for her in Muddleford... is there?

An utterly uplifting and completely hilarious summer read about learning to trust yourself and of finding love and friendship in the least expected places for fans of Jessica Redland, Heidi Swain and Holly Martin.